Walsh University Office of Residence Life is a featured program. 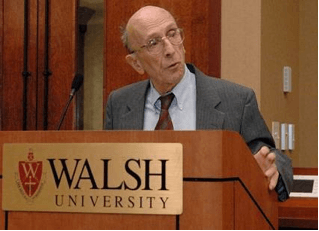 The Br. Charles St. James Scholarship was founded in 2007 in the honor of “Brother Charlie” and his dedication to Walsh University. The scholarship originated to help those students that exemplify service to others. This is a continued project through Residence Life, that the Resident Assistants work on to honor those students that embody the morals and values of Brother Charlie himself.

Brother Charles St. James was born on June 29, 1932 in Burlington, Vermont. After his freshman year at St. Michaels’s College, Colchester, VT, Brother Charlie decided to begin his formal training as a Brother of Christian Instruction at La Mennais College in Alfred, Maine. From 1955 to 1970, Brother Charlie was a high school teacher. From 1970-1974, Brother Charlie worked for the Archdiocese of Detroit. Prior to coming to Walsh in 1992, he spent thirteen years at Loyola University in Chicago working with campus ministry.

From 1992 until his death on December 17, 2006, Brother Charlie served the Walsh community through his charismatic presence, ability to listen and desire to help students. The past fourteen years of his life Brother Charlie fought the onset of Parkinson’s disease. His illness did not deter him from his passion of helping others, especially students at Walsh. Brother Charlie’s legacy lives on and his devotion to students will long be remembered.

Br. Charles St. James Bowl-A-thon is a yearly event to help raise scholarship fund to honor his long-time commitment and dedication to the students of Walsh University. Students who are dedicated to the service of others are encouraged to apply for this Scholarship.