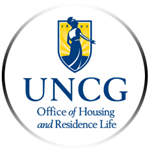 University of North Carolina-Greensboro Office of Housing & Residence Life is a featured program.

The Office of Housing & Residence Life at The University of North Carolina at Greensboro places a heavy emphasis on the principles of social justice as evidenced in our vision statement:

“Housing and Residence Life at the University of North Carolina at Greensboro will be a leading residential program by incorporating social justice principles in providing students with comfortable and safe living environments that support academic success.”

The Social Justice & Diversity Initiatives Committee strives to be intentional and engaged in activities that promote our committee’s core values, which include: equality, fairness, access, scholarship, intercultural dialogue, and social and cultural awareness. As an institution that prides itself on being the most diverse campus in the UNC system, the Social Justice and Diversity Initiatives Committee takes on the challenge of creating a campus-wide residential community that promotes the respect, dignity and growth of every member of our residential community.

Professional Staff Training
One of the university’s first African American students, Jo-Ann Smart Drane, came and spoke to the residence life professional staff about her experiences as a student in the residence halls in early 1960’s. Professional staff also visited the International Civil Rights Center & Museum in downtown Greensboro which focuses on the start of the sit-in movement led by the Greensboro 4 beginning on February 1, 1960. The discussion and museum visit were followed up with group reflection to create awareness of privilege, history, and its impact on our current campus.

Student Staff Training
Resident Advisors participated in the “Common Ground” activity to start conversations about differences in socioeconomic status, life experience, culture, and religion and life experiences. Resident Advisors also participated in an activity on ethics and assumptions based on stereotypes we create for people based on physical appearance. These activates were added to training to help Resident Advisors give each student an opportunity to be an individual with a story, rather than just another student.

As a part of winter training, the professional staff read and discussed articles about “ableism” and how our department can be more intentional and inclusive in programming across campus. 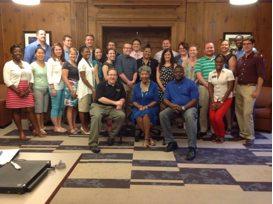 The staff with Jo-Ann Smart Drane

Breaking Barriers 2014
The 2014 Breaking Barriers program series sponsored by the Social Justice and Diversity Initiatives Committee opened the program up to one program by each housing and residence life community over the course of the month of February. The programs tackled issues such as socioeconomic status, privilege, identity development, stereotypes, able-ism, gender and sexism.

Co-Sponsoring the Greensboro Fem Fest
On March 27th, 2014, actresses and the crew from The Vagina Monologues production partnered with Maya Art Gallery on a local campus street to support FEM FEST: an art show to support local female artists. FEM FEST included performances from The Vagina Monologues cast and live music from local bands. This show, as in years past, helps to build awareness as well as celebrate feminism. In honor of Women’s History Month, the program promoted women’s’ talents and contributions to society.

Sponsoring the UNCG production of the Vagina Monologues
As UNCG has historically been a driving force in the education of women, it is surprising that the Vagina Monologues has not continued to be a yearly program on this campus. The V-Day organization is a global activist movement that works to end violence against women and girls. One of the most easily recognized initiatives of the V-Day movement is the “Vagina Monologues” – an award-winning play based on the work of V-Day Founder Eve Ensler. For over twelve years, various organizations have brought this production to their communities in an effort to raise awareness about the issues girls and women face in today’s society.

Vagina Monologues, held in April 2014, was a collaborative effort between the HRL Social Justice and Diversity Initiatives Committee, The Women and Gender Studies Department, Greensboro Planned Parenthood, The Wellness Center, the Dean of Students Office, and The Elliott University Center.

Submitted by Megan Delph, Assistant Director for Residence Life, The University of North Carolina at Greensboro