Louisburg College Department of Housing and Residence Life is a featured program.

In support of a newly established RA program at Louisburg the Louisburg professional residence life staff has made it a top priority to show continued appreciation to new paraprofessional staff. Throughout the academic year, the CD staff recognized the RA staff, as a whole, in two different ways. During the fall semester, an entire week was set aside to recognize the hard work of the RA staff. During the spring semester, two separate days were identified to again showcase appreciation for the amazing job the student leaders had done! 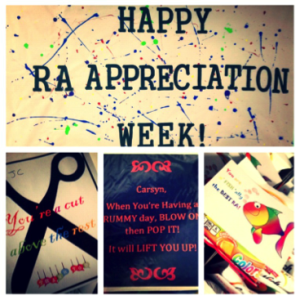 In mid November, the CD staff planned an RA Appreciation Week! The week consisted of five days of gifts and thank you cards coming from staff throughout the Department of Student Life.

Day One – “You’re a cut above the rest!” RA’s were presented with a pair of scissors, a roll of tape [pictured above], and a thank you card from the VP of Student Life.

Day Two – “You lift me up!” RA’s were given a bag of balloons that had motivational quotes inside them [pictured above] and a thank you card from the Director of Residence Life. The RA’s were instructed to blow up a balloon and pop it on a day that they may be having a tough time balancing their role as an RA, an athlete, a student, and the 1000 other commitments they may have on our campus.

Day Three – “You’re o’FISHally one of the best RA’s!” RA’s were gifted a bag of gold fish [pictured above] and a thank you card from the Associate Dean of Students.

Day Four – “DONUT you know, I appreciate you a HOLE bunch!” RA’s were given a bag of doughnut holes and a thank you card from Student Engagement and the Director of Counseling services.

Day Five – The RA’s were presented with a home made Italian meal and thank you cards from Campus Police.

RA Appreciation Week for the fall semester, 2013 was a great success! The student leaders felt appreciated and the entire Student Life Department were active participants in its success! To insure the new RA program would be a defining step to shape the new and improved Department of Residence Life at Louisburg College, this simple but effective step was critical to highlighting the essential participation of the student staff. With its initial success, plans were then made to continue the reinforcement with the program for the following semester.

Day One – In January, the CD staff planned an RA Appreciation breakfast where the RAs were invited to come socialize with the CD staff over juice and bagels before class. The goal was for the new and returning RAs to have the opportunity to engage with the professional residence life staff in a comfortable environment and get to know the CD’s who they may or may not have known in the previous semester.

Day Two – In early April, RA Appreciation Day consisted of an entire day of THANKS to the RA staff from the department of Residence Life. The morning kicked off with a fun video, an email, and fliers around campus telling everyone that it was RA Appreciation Day! The tag line was “Have you hugged your RA today?” After the announcement was made, RAs were encouraged to go to their CD’s office to pick up their “Appreciation Pack”. The pack of goodies consisted of their favorite bag of chips, reading “You’re all that and a bag of chips”, a pack of their favorite gum, reading “You’re the coolest thing since bubble gum”, and a personalized thank you card from their direct supervisor.

After a day full of thanks and hugs from their residents, the RA staff met up with the CD staff for a pizza party! The professional and paraprofessional residence life staff enjoyed dinner and socialized with one another. Following dinner, superlative awards were presented to each RA, to again emphasize the great things that each and every one of the RA’s is doing in their buildings and with their residents. 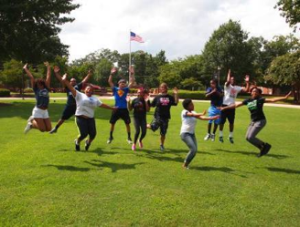 The second year of the new RA program during the academic year 2014-15 will be just as eventful as the first with respect to appreciating the hard work of our student leaders. Fall semester, 2014 will again include a week of RA appreciation while spring semester will be filled with thoughtful days of appreciation for everything that the RAs have done for their residents and their communities throughout the academic year.