By the time you read this the Hot Stove Baseball League will be alive throughout the Northeast and other locations to provide those die hard baseball fans with their “fix” until pitchers and catchers report to spring training in February. While we’re still dealing with our “World Series hangover” let’s take a look at the similarities between our daily efforts in residence life and the World Champion Boston Red Sox.

The recent euphoria about the Boston Red Sox achieving success with their playoffs and World Series accomplishments has applicability to our roles in Residence Life. I sometimes feel like a fish out of water up here in western NY surrounded by Yankee fans and living in a city with the Minnesota Twins AAA farm team making its home in Rochester. But let’s get back to the Series before we quickly forget. Think about what happened with the Old Town Team in the past 12 months. A year ago they were mired in an organizational change with staff and management; a very ugly time and a situation few thought could be overcome in the short term. There was a high profile manager who meant well but didn’t “fit”. A GM with the right skill set and credentials who was new to the job but dealing with inherited personnel. Let’s not forget that some players had lost their focus and perhaps were not buying into the organizational model and plan. To armchair managers, serious fans and fantasy team owners, it looked pretty ugly. It reminded me of changes and evolution in many of the residence life/student affairs organizations I have observed or been part of. Change isn’t easy and quite often; it takes a number of years with incredible patience to successfully come full circle.

Back to the Sawx. It wasn’t just the beards. I look beyond the early Movember or Amish look/appearance and consider what all have been talking about-the unique commitment the diverse group of players made to achieve team goals. We’ve heard/read much about the chemistry, the “fit” of all the players to achieve success; individuals bypassing personal achievement for completion of team goals. And it all turned out pretty well, didn’t it? If only we could harness the same variables and instill the same commitment for our residence life programs! Then we would be STUDENT STRONG! Players seem to create a personal pace to remain consistent; essential qualities in residence life when working with students and staff. Dustin Pedroia is one of my favorites for his dedication, work ethic and leadership. After the season the story came out describing Pedroia’s wrist injury and the need for immediate surgery. However, due to the ever present team goal and emerging success, he postponed time on the IR to keep his teammates focused, to assist wherever he could and to serve as a role model. I’m not suggesting residence life staff overlook personal medical needs, but the leaderships and role modeling? Gosh, that’s needed on a daily basis!

In the midst of all the excitement in Beantown one individual rose above the rest and to use the sports analogy, carried the team on his broad shoulders. DAVID ORTIZ, Big Papi, was considered by the Minnesota Twins a throw away player and essentially gave up on him 10 years ago in what now could be considered one of the most lopsided trades in baseball history. He morphed into a superstar who developed an incredible pride for his adopted home and turned into the standard bearer for the team as well as the city during a very difficult time in the ball club’s and city’s history. He not only focused his teammates but also concentrated on his work as a professional baseball player with a specific role for the team. During the playoffs and the October Classic he became a hitting machine with a final batting average in the World Series at a stratospheric .688!! And this success was achieved despite the defensive shifts all the teams employed to attempt to keep Papi out of the position of being a game changer. There was only one problem-it didn’t work as Ortiz hit around or through or over the shifts! Amazing! He was not only the designated hitter but the designated leader of the team and for many in the Boston area. Jeff Silva is the police chief of Westwood, MA, assigned to assist with post game crowd control throughout the playoffs and World Series and knows something about the qualities of people. He had this to say about Ortiz. “He represents everything Boston is about. The epitome of leadership is when people look to you in time of trouble and you want to be the one to provide the help. That’s what people see in David: a true leader.”

And residence life staff needs to be more like Big Papi – minus the spitting on the batting glove! He truly cares about his teammates and his city/environment. He became the offensive force through constant observation and study of opposing pitchers via videotape review. Ortiz put in the time/energy/work to gain a high level of success. He was always positive; continually inclusive; exhibiting active leadership. Big Papi is a baseball aficionado with a total commitment to the game, his team, and his craft. Shouldn’t residence life staff exhibit these same qualities whether it be managing floor, a hall, an area a department function or the entire organization? Ortiz has an outsized capacity for resilience (think about his performance/the team issues of the previous season!) and truly cares about team success. He has the respect of his teammates as well as his peers. Leaders in residence life possess many of those same characteristics although perhaps we never put them in the same context as a professional baseball player. So next time a situation occurs for you in residence life, BE LIKE PAPI!

A final observation regarding baseball, the Red Sox and residence life: The Manager of the Year was named in the second week of November and former Red Sox manager Terry Francona was recognized for his efforts as the skipper of the Cleveland Indians who guided the team to its first playoff berth in XXXX years. A worthy selection for sure but his choice overlooks a masterful management job by the Red Sox’s John Farrell.

All Farrell did this year:

The baseball season basically represented a six-month stress test, and Farrell never broke stride. Farrell handled all of the above flawlessly, his accomplishments even more spotlight-worthy because they came in the wake of a team singularly failed by its former leadership. The Red Sox were a mess in 2012, and Farrell fixed them.

“I am humbled to be included as a candidate for Manager of the Year. It’s an honor to represent the Red Sox, but we are most proud to be World Champions!”

*Ben Cherrington, Boston General Manager on his man in the dugout: “I’ve said it too many times and maybe it sounds easy now, but to come into a place that’s struggled and say you’re going to do something and actually pull it off, and do it the way he did it, requires a lot of work and a lot of leadership and it takes a lot of communication, and a lot of skill.”

Go back and read the list of management attributes Farrell exhibited. Think about the interactions you have with staff and students as a residence life professional and your responsibilities in your position. Are you displaying any of the qualities John Farrell did this past season? It’s not too late in your season to modify some of your abilities to enable you to achieve some of the same success.

See you on the field! Check out all the pitchers and catchers report for spring training! 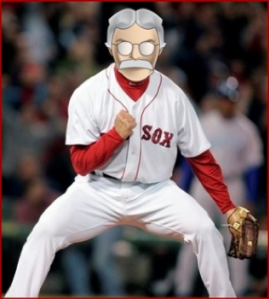